The 2017 Engineering Distinguished Alumni Award is given to
VICE ADMIRAL CHARLES A. RICHARD
Deputy Commander of US Strategic Command 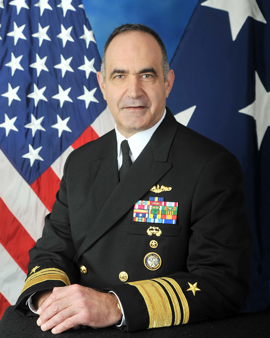 He served on a number of submarines, including the USS Portsmouth, USS Asheville, and USS Scranton, before being given command of the USS Parche. He also commanded Submarine NR-1, which at the time was the Navy's only nuclear-powered, deep-submergence submarine. He went on to command Submarine Group 10 in Kings Bay, Georgia, and served as deputy commander of Joint Functional Component Command for Global Strike at U.S. Strategic Command.

His most notable staff assigning include serving as executive assistant and naval aide to the under secretary of the Navy, serving as chief of staff of Submarine Force Atlantic, and commanding Submarine Squadron 17 in Bangor, Washington. He has also served as a member of Chief of Naval Operations' Strategic Studies Group 28, studying the integration of unmanned systems into naval force structure.

He served as director of the Undersea Warfare Division in Washington, D.C., where he was responsible for the planning, programming, and budgeting for acquisition, operational readiness and modernization of our nation’s submarine force. In summer 2016 he nominated by President Obama to become deputy commander of United States Strategic Command. He assumed that position in September 2016 and was promoted to the rank of Vice Admiral.